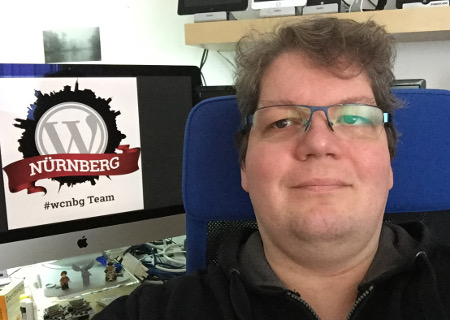 If you attended WordCamp Nürnberg this year, or have attended WordPress Meetups at Nürnberg or Hannover, you’ll know Frank Staude.

Frank actively supports WordPress as a moderator on WordPress support forums and as a translation editor.

We asked Frank a few questions about his journey with WordPress and development. Here’s what Frank had to say!

Tell us about yourself and how you got involved with WordPress.

My name is Frank Staude, I am 46 years old and live near Nürnberg.

Back in the year 2010, when WordPress Version 3.0 was out, I wanted to create a Podcast. The CMS we were using didn’t provide us this functionality. The options I had was to either program it for our CMS or use a different CMS for the project, which would provide us suitable functionality. That’s how I started and stuck with WordPress.

It was pretty obvious that I had to make the entire website using WordPress. I then took a small step forward, by completing a client’s project using WordPress. I found out, I can do a lot with WordPress. At this point, I discovered the German forum on wordpress.org. I found many unanswered questions which helped me understand some specific and common problems. That made me understand every single detail in WordPress. As one of the very few active users, I quickly received Moderator rights. From 2011 on wards, I started visiting WordCamps; I met people face to face instead of just following them on Twitter or reading their blogs.

Apart from being a Moderator, I became a translation editor the German translations. I started the WordPress Meetup in Hannover and conducted it till I moved to Nürnberg. In Nürnberg, we organised the WordCamp Nürnberg 2016 and now that the founder has moved to another place, I currently conduct the event.
I love to visit WordCamps and other BarCamps and also encourage other to participate in it, where I hold a timely session.

And yes, I have other hobbies too 🙂

You’ve developed a number of plugins. What thought process is involved in converting an idea into a plugin?

The first thing you need is a specific idea. Only then can we begin the thought process of how to use WordPress to get the desired results, as in which filters or actions can one possibly use, etc. When required, you should read the documentation or go through WordPress code, to get a better idea of how a functionality actually works and how it could be manipulated.

Apart from that you should also think about building the solution the WordPress-way. This means that the solution you build, should also works on other WordPress installations. For example when you know PHP well but don’t have any experience in WordPress development, you tend to take the easier way out and build the solution according to your convenience. But what if the code doesn’t work with other installations? This includes making yourself familiar with the APIs, which WordPress provides.

What factors according to you contribute towards making any plugin a success? Do you have any favorite plugins, which are not developed by you?

There is no specific recipe to a successful plugin.

How would you even define successful? I can measure the success of a commercial plugin by its sales figures but what about a free plugin? Number of downloads? Positive reviews? Or because it has helped the client with something it was originally developed for? After all everyone has to decide for themselves, on what basis they would judge the plugin- when it has to be judged.

People have different tastes. I would say, a plugin should do exactly what it promises to do, be intuitive, should come to us without frills and frosting, should not include permanent and aggressive advertising for a “PRO” version and the look should be like the rest of WordPress user-interface and should not have its own deviant UI. Other users may see this differently.

To identify what users need, it is necessary to find out what people would like to do or what problems they have. This can be done by going through forums (which I think is much better) or attending a WordCamp or making a local WordPress Meetup visit – as you get to know people and their needs, you can also take suggestions for plugins. You can also get feedback for some of your ideas.

Most WordCamps offer a so called contributor day before or after the actual camp, where all work together on WordPress (develop, translate, plan, etc) – and contribute. You should really do something like that once a while as it is a great opportunity to learn, to get insights, to meet new people and generally to join this great community.

To start with, you should try simple tasks instead of having the I-can-build-all-plugins attitude. That way you can get familiar with the various APIs.

You’re an active member of the WordPress community and also a translation contributor for WordPress. According to you, has the language barrier affected the growth of German developers in the community?

I don’t see it that way. Every developer has the habit of reading/creating the documentation in English. Moreover, most of the meetups (not just the WordPress meetups but all those found on meetup.com) in bigger cities are held in English. And when I look up to the next generation, I see that they face lesser problems as compared to an “old sack” like me, as we did not speak or practice English for several years after school.

What I see as a problem is when people waste time in trying to dig themselves deeper into the community. You should be able to balance your time and know what you’re spending it on.

You’ve been a speaker at several WordCamps. How would you describe your first experience as a speaker?

I do not prefer to be in the “limelight”, rather it seems like a hurdle, every time I register for a session. Before my first WordCamp appearance in Hamburg , I had held many sessions at our Meetup – so it was just about 10 to 15 people in the evening and a good speech-delivering training for me.

However, I almost died when I saw the large auditorium in Hamburg, where my session took place. Fortunately my first session was with Torsten Landsiedel, so I didn’t have to stand alone in the front 🙂

Which industry experts would you love to work with someday and why?

To be honest, there’s no one in particular. By organizing several Meetups, the WordCamps in Nürnberg and by participating in many WordCamps you will learn a lot in many different ways from all the nice people in the WordPress community. You may either have friendly relations with most of the people, or you may have worked together on projects with the rest. And so you learn that there exists no such term as “celebrity status”.

If you weren’t a WordPress developer, what career path would you have chosen?

As stated in question 1, WordPress was an unexpected turn for me. If it had not been WordPress, it might have been Joomla, Drupal or Typo3. If the question is, what I would do if I did not work in IT, I must say it’s a good question. “Something with computers” has been my dream job ever since I was in school. If I did not program, I would probably still be in the admin area – which comes under the term DevOps.

Also, I love cooking but don’t want to take it up as a profession.

Frank, I enjoyed reading your logical and insightful answers. They reflect your years of experience with WordPress and the WordPress community. For those interested in connecting with Frank, you can follow him on Twitter @staude, or better yet, attend a WP Meetup in Nürnberg if you’re in town. 🙂